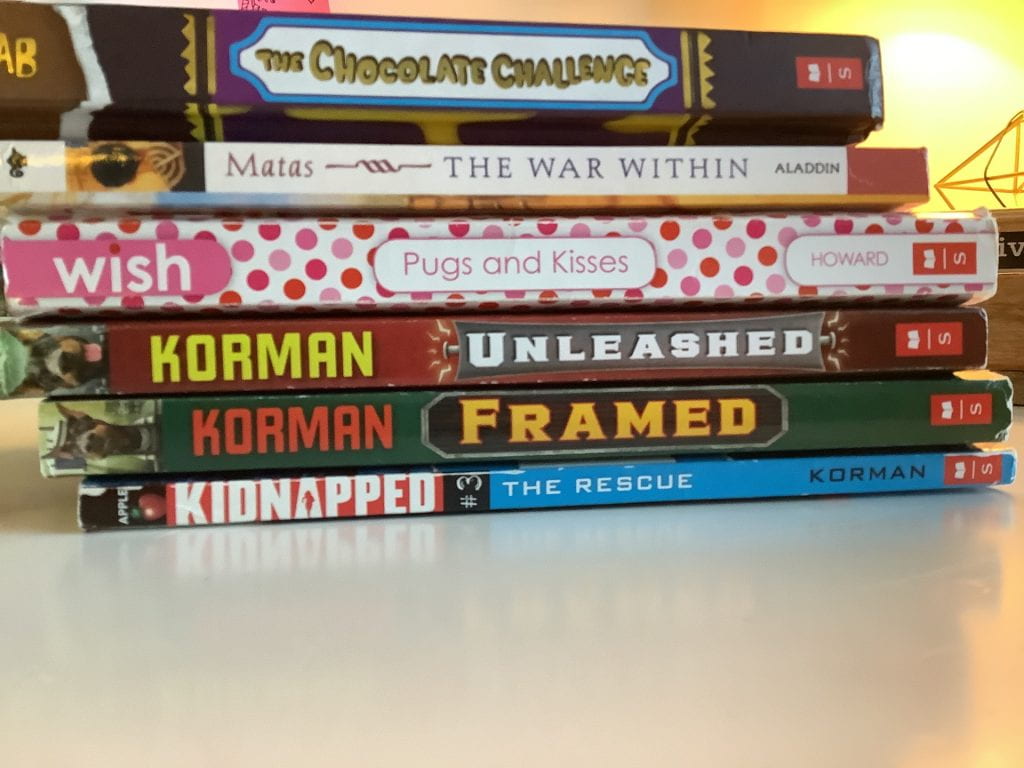 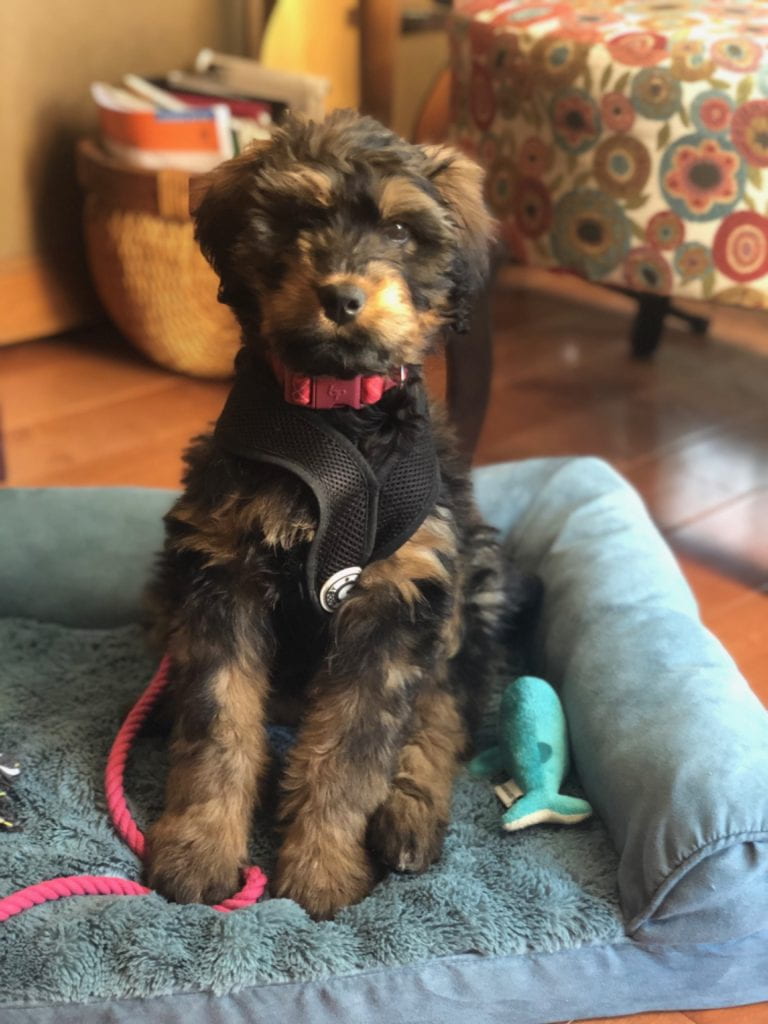 I like all animals (other than rodents) but personally, I think dogs are better than cats. I think this because all my encounters with cats have been bad. All encounters with dogs have been pretty good. Also, dogs run around and love you unconditionally. Kittens are cute, but once they get older, all they do is sit on beds, hide behind things, and make weird noises. Some people say having a dog is too much work because you have to walk them. I enjoy walking my dog and it gives me a reason to go outside. Cats go to the bathroom in litter boxes which are in your house, and then your house smells bad.

I have a dog. Her name is Bailey and she’s a Bernedoodle (Bernese Mountain Dog + Poodle).  She’s 3. Bailey loves to run around, eat things she’s not supposed to be eating, and lick people. She’s nice, friendly, cute, playful, and funny. These are my reasons why I think dogs are better than cats. 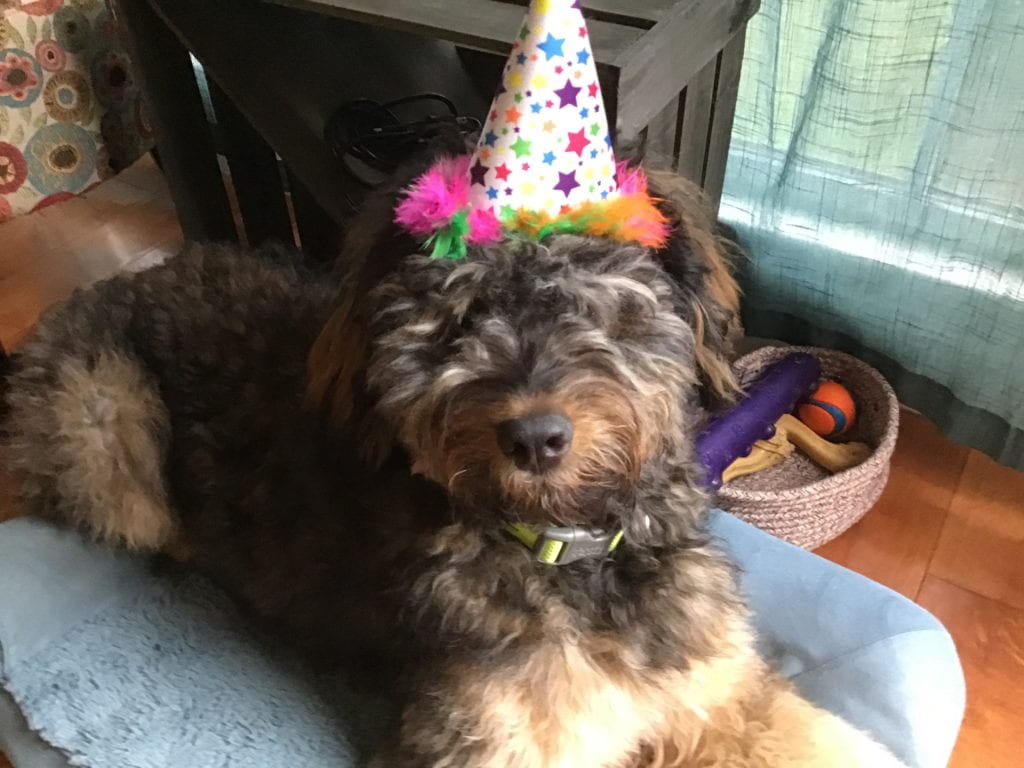 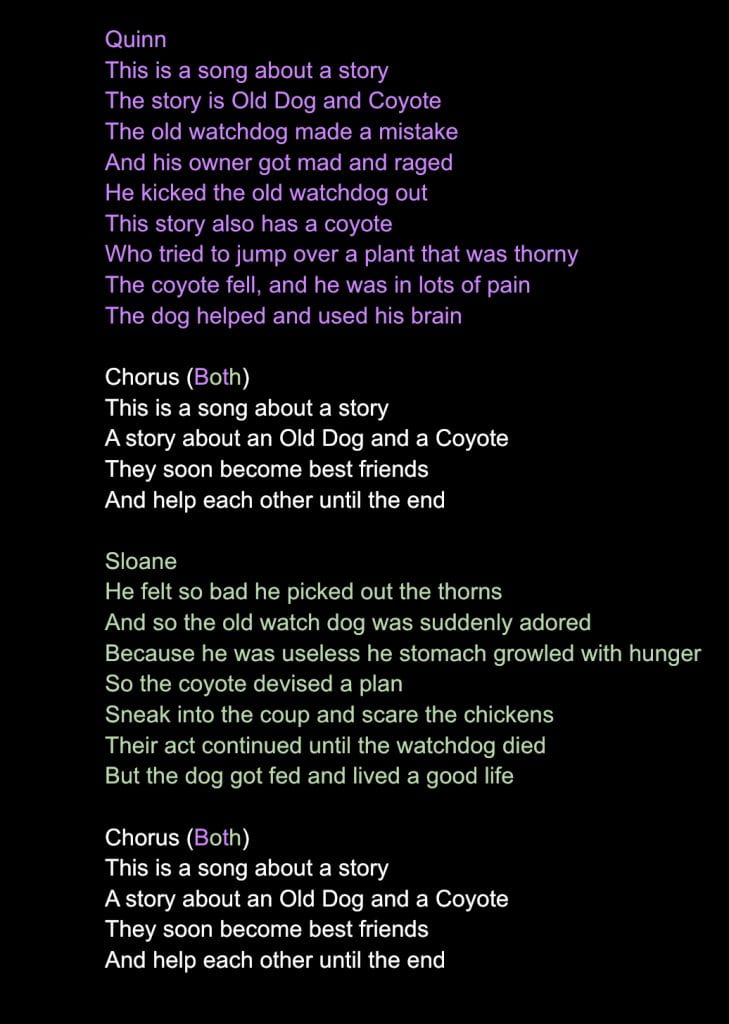 For my Wisdom Tales Project, me and my partner wrote a song. The story we chose was Old Dog and Coyote. My partner was Sloane.

Old Dog and Coyote is a story from The Americas. The story is about a watchdog who failed to do his job one day and his owner got mad and kicked him out. As the dog was roaming around the desert, he saw a coyote trying to jump over a cactus. The coyote failed and had thorns stuck in him. The dog helped the coyote get the thorns out and the coyote wanted to return the favor. From that easy on, the coyote would come and bother the chickens, and the dog would act like he was scaring away the coyote. The dog’s owner praised him and the dog lived a good life.

The story is Old Dog and Coyote

The old watchdog made a mistake

And his owner got mad and raged

He kicked the old watchdog out

This story also has a coyote

Who tried to jump over a plant that was thorny

The coyote fell, and he was in lots of pain

The dog helped and used his brain

A story about an Old Dog and a Coyote

And help each other until the end

He felt so bad he picked out the thorns

And so the old watch dog was suddenly adored

Because he was useless he stomach growled with hunger

So the coyote devised a plan

Sneak into the coup and scare the chickens

Their act continued until the watchdog died

But the dog got fed and lived a good life

A story about an Old Dog and a Coyote

And help each other until the end 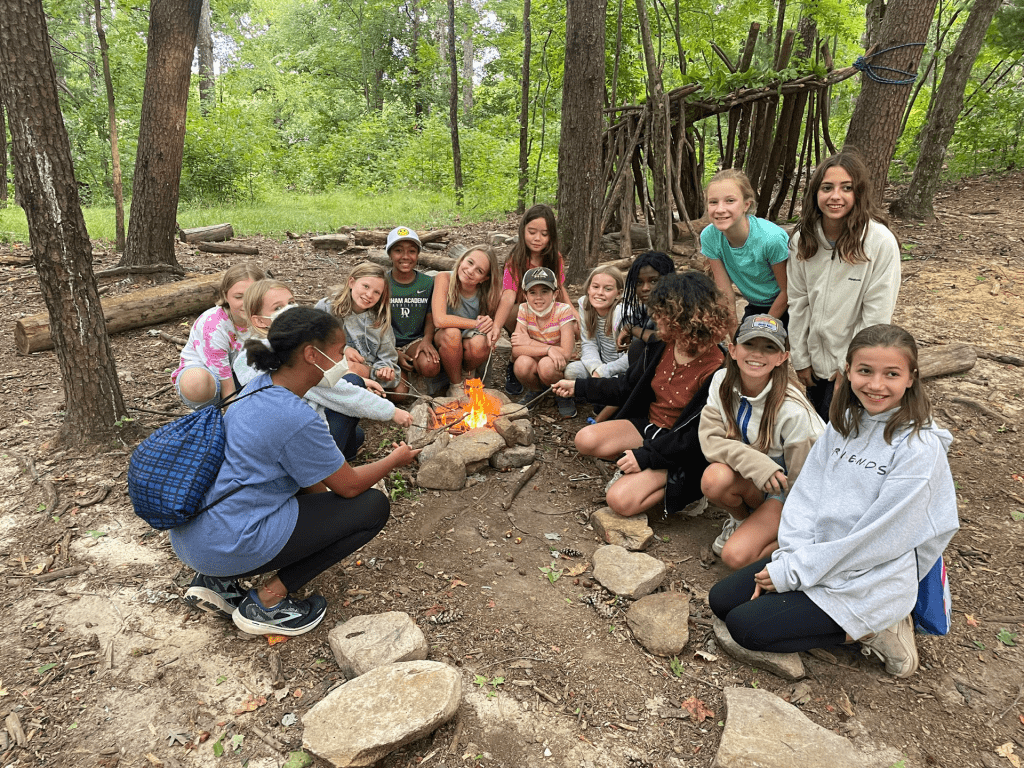 On a cold, rainy day, the sixth grade at Durham Academy went to Camp Hanes in September. When we got to school, we waited for everyone to get there. Once everyone got there, we lined up with our advisory and put out bags under the bus we were on. There were two buses. I was on bus two. The bus ride was two hours long. I was on bus two. We did fun things like watching a movie, talking, and passing around candy. When we finally got to camp Hanes, we put our bags in the gym then went to a big room. We then got our cabin assignments. We also met the counselors.

I  was in cabin eight I went to my cabin and put my stuff down. My cabin adult, Mrs. Ellis, told us our cabin activity groups. I was in group six. After that, we had lunch. We had mac’n cheese and chicken. I sat at the table where all the forgotten kids sat. It was by far the best table. After lunch, everyone went to the airnasium. We found our groups and lined up. I went archery first, then canoeing, then hiking. The hike was my favorite because it was hard, fun, and when we got to the top, the view was great. For dinner, we had spaghetti and garlic bread. Before we went to bed,  we had s’mores. 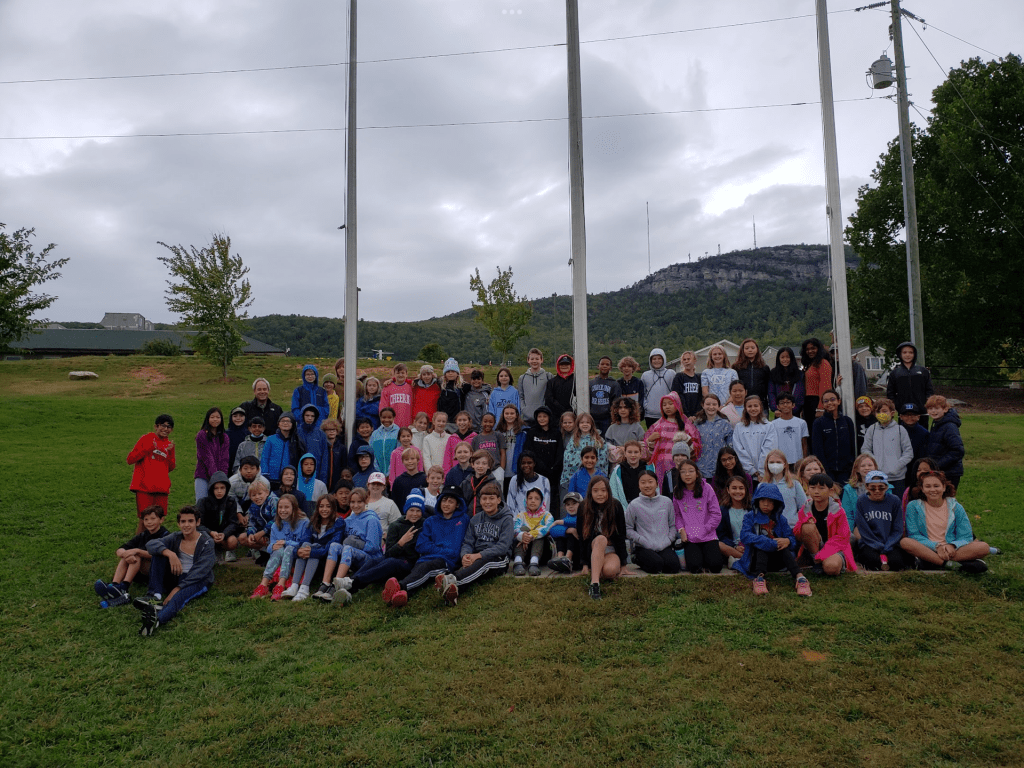 I’m proud that I didn’t get hurt on the hike, and that I didn’t use the rope to get up the steep hills. We were supposed to go to Camp Cheerio, but they didn’t have enough staff. I’m grateful that Durham Academy gave us that opportunity. 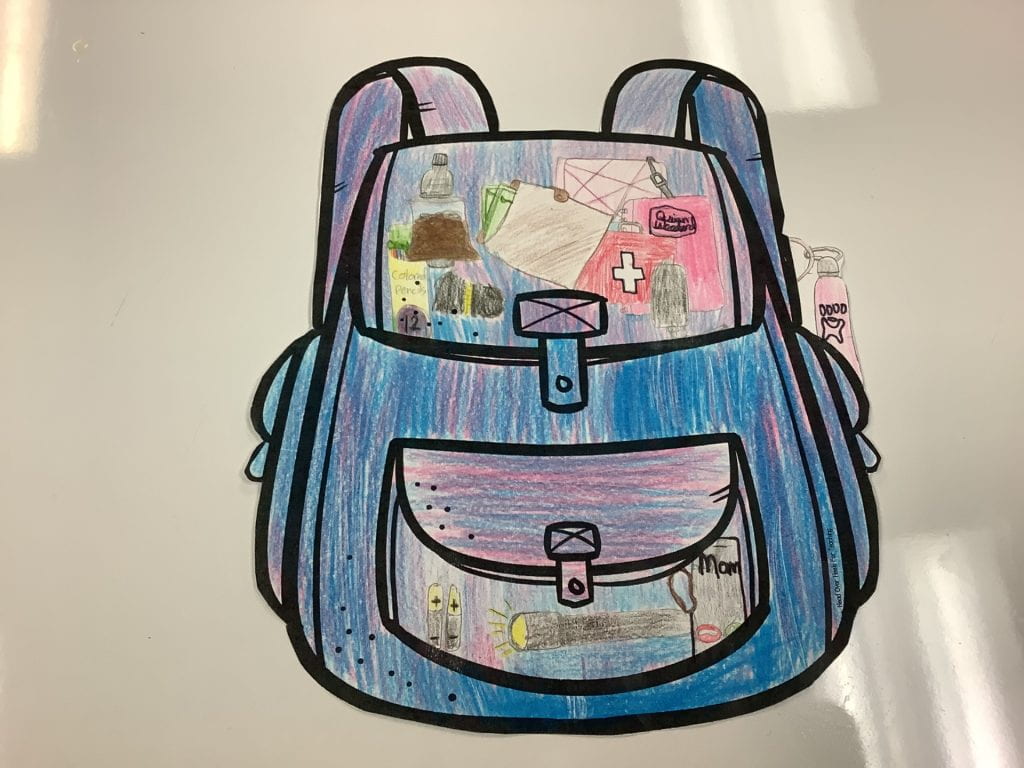 Over the summer, I read a book called Finding Someplace. In Finding Someplace, by Denise Lewis Patrick, Reesie, the main character, had to pack a backpack because she was in the middle of Hurricane Katrina. Reesie was all alone at her house, so she packed a few things, then went to her neighbor’s house. After the hurricane was over, she went to a big building called the SuperDome. In the SuperDome, someone stole Reesie’s backpack. Reesie didn’t know that was going to happen, and she didn’t have a lot of time, so she just grabbed the things that were important to her.

If I was in that situation, I’d pack only the things I need. I’d pack a flashlight with extra batteries, a portable charger, and my phone. I’d pack those things in case the power went out, or if my phone died. I’d need a phone to call 911, or my parents. These are things I would pack for my entertainment. A notebook, and colored pencils. I would also pack a medical kit, and important papers like my birth certificate for emergencies. I’d bring a jacket if I got cold. Those are the things I’d pack if I was in the middle of a hurricane and I had to leave.

Back to top
Skip to toolbar